It’s Saturday the 18th November 2017 and we are at The Meeting Room, Elland with Xander and the Peace Pirates with support by Casino Rockets.

The reputation of this band really does precede them and they do not fail to adhere to the hype, but will they live up to it? 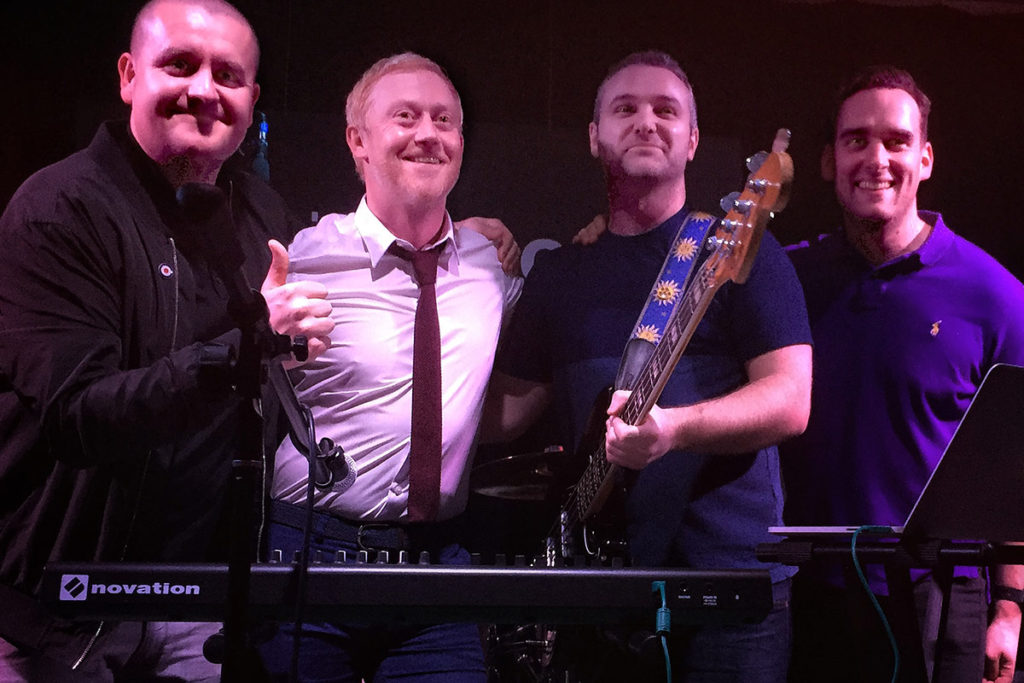 But first, we had a local band play The Meeting Room in the support slot. It was an unheard of band and it was not a blues band at that (insert shocked face here).

However a couple of the band members were known to be accomplished players by the Meeting Rooms Music Director, so the Casino Rockets made their Meeting Room debut.

They took to the stage and the sceptical audience awaited their first move. The sampler introduced the beginning of the show and the band kicked into their first track ‘Satellite’.

Tight and clean, these guys rocked into their first track which was awash with time signature changes, stops and starts, backing vocals, harmonies and it built as a great song should. It was a fantastic surprise. The tracks that followed were much of the same ilk in that they were complex and very well performed.

Richard Anderson delivers solid rhythm guitar that fills the stage and then slides into a wailing solo to keep everyone on their toes.

Dan Lea is a total ‘groovemeister’ on bass guitar. He can often be seen bobbing along at the back but he is back there providing full, solid and incredibly intricate bass riffs.

The remaining member of the rhythm section is in the form of Chris ‘Drums’. The whole set was made up of original songs, it was easy to figure out that Chris had used this opportunity to shine with his interesting rhythms and clean fills.

Last but by no means least, Tiv Whitaker on vocals and keys (and sampler). Tiv’s vocals soared over the top of the complex tracks and his vocal range was vast. From the roaring lead vocals in tracks such as the aptly named “fired up” to the fast-paced lyric of the track “Outside In” then switch to the clear, angelic vocals that are used in perfect harmony with Richard and Dan’s through several of the songs.

A mature delivery for such a new band

Nothing about any of their tracks was simple or straight forward and they perfectly reflected the maturity, experience and creativity of each member of the band.

They were impressive in almost every aspect. They were tight, they had great original songs, they were entertaining and the audience loved them.

The only criticism as an outsider would have been that the “patter” between the songs was a little disjointed and unsure.

But of course, I am not an outsider. I am a woman in the know, and I know that the guys failed to mention one vital fact…

This was their first gig ever as a band

The songs were brand new and had never been played live and although they’ve all known each other for years, the lads have never played all together as a band and they were magic.

I honestly could not have been any prouder of our local lads. They delivered a fantastic show and I have no doubt there will be many great things coming from these lads so please keep an eye out for the Casino Rockets.

Xander and the Peace Pirates Took To The Stage

Firstly, the guys just look cool…ok? All togged up in a kind of bohemian style and it really works aesthetically. But nothing can prepare you for what you are about to see.

The guys opened the show with the first track “Fire” which slapped the audience right in the chopper. This track is quite rocky and features some heavy guitar and wailing vocals from lead man Keith Xander.

Now, for me, Keith looked a lot like a younger Stevie Ray Vaughan (I’m sure SRV fans will see what I mean by the pics) and listening to that heavy Strat sound I can’t help but think that he was an influence along the way. It was especially notable to me on the cover of “Redhouse” which was complimented exquisitely by Mike’s solo cutting through that heavy rhythm.

A front man with presence 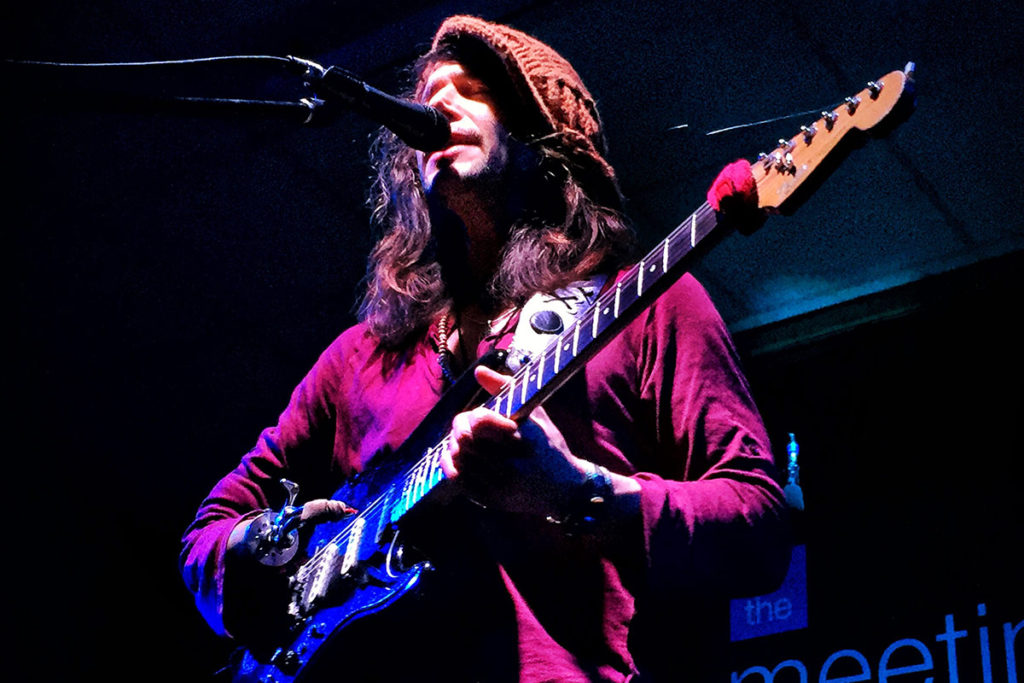 Keith’s guitar skills are apparent from the offset and his style is confident and incredibly entertaining to watch. He can switch the mood of a room with his heavy rock vocal and his sweet, heartfelt lyrics such as in tracks like “Dancing on the Light”.

Keith has the playability, vocal range and confidence that makes a seriously cool front man. He is incredibly comfortable with his audience, very likeable and seems to genuinely have fun playing with his comrades on stage in the form of his brother Stu Xander on acoustic and Mike Gay on electric guitar and slide.

Now, there was a little bit of a situation that occurred the night before the Meeting Room gig that got us a little worried.

Due to illness of XATPP (Xander and the Peace Pirates) bass player Joel Goldberg and drummer Adam Goldberg, the gig the night before ours had to be cancelled.

We crossed all our fingers, toes, legs and anything else that could be crossed and prayed to the gods of rock and roll that all would be well.

Our saviours came in the form of drummer Simon Finley and Bass player Etienne Girard.

I am unsure how much these guys have played with XATPP but I do know that the gig was very last minute for them. And they nailed it. The gig was tight and energetic and what we like to say “suck free”.

There were many new XATPP fans that night (myself included) and you could have sworn that the whole band had been playing together for years based on the smoothness of the song transitions and the energy they all delivered.

Stu very much seems like the driving force of the band. He led the newly appointed rhythm section through the complex changes and intricate work of their original songs while maintaining his very definite stage presence. Swaying to and fro with his wild hair and acoustic guitar, Stu strummed, picked and beat his way to the hearts of the Meeting Room audience with the rest of the Pirates.

Then it would be Mike’s time to shine 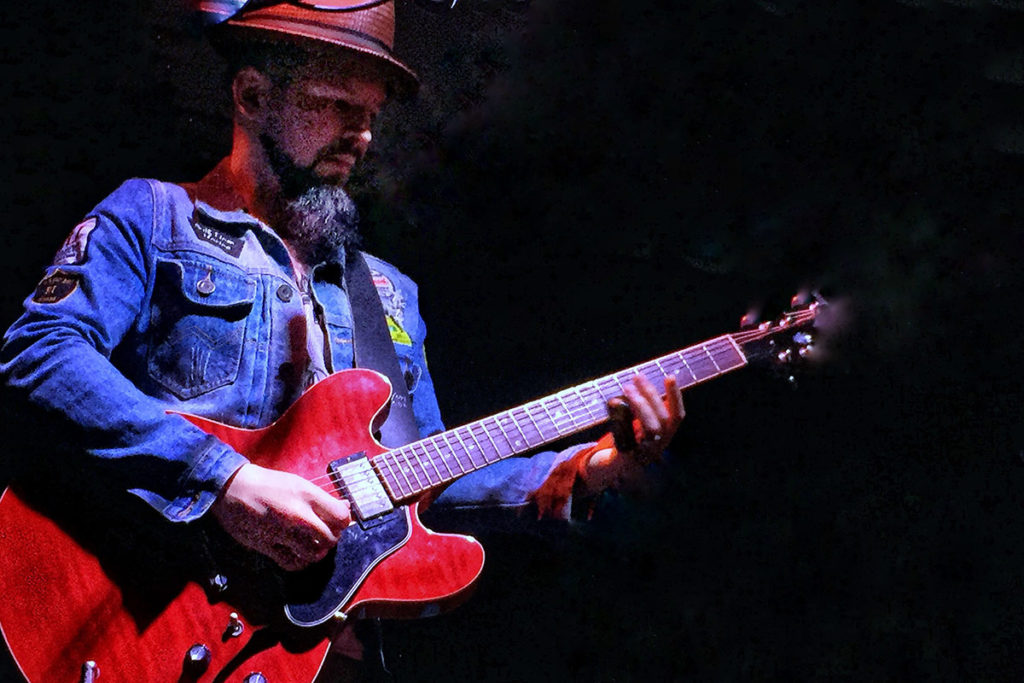 Then there was Mike Gay, who looked the part, acted the part and holy crap, could he play the part. His guitar playing was subtle the majority of the time which allowed Keith to be at the forefront creating those heavy riffs and wailing guitar solos.

Mike is an incredibly accomplished player who demonstrates class and the art of subtlety but can also melt your face when given the chance. He has some seriously cool looking guitars and he knows how to make them all sing.

Both bands were professional, generous with their time and they absolutely gave 100% for the audience that night.

Good on ya lads!