It’s Saturday the 23rd September and we are at the Meeting Room in Elland for the Stevie Nimmo trio.

Stevie first popped along to The meeting Room when Danny Bryant played last year (2016). He dropped by with Ben Poole and got up with Danny for an impromptu jam out which blew the audience away.

After that, Paddy made sure to get him booked as soon as possible and the gig was tremendous (as promised) so it was a no-brainer that we had to have him back.

So Stevie was all booked, tickets were selling and all was good.

Around 10 days before the gig, Paddy gets a call from Stevie to say he has fallen off his bike and broken his arm and can’t play the guitar… AAAAAARRRGH!!!

Panic set in, Paddy got that sinking feeling and a million questions flooded through his head. How to get a replacement? Would we have to refund? What if people are upset?

Only for Stevie to announce “it’s ok though, my brother Alan is going to do it!”

For any blues/rock fans out there I am sure you can appreciate why Paddy got a little excited by this prospect. 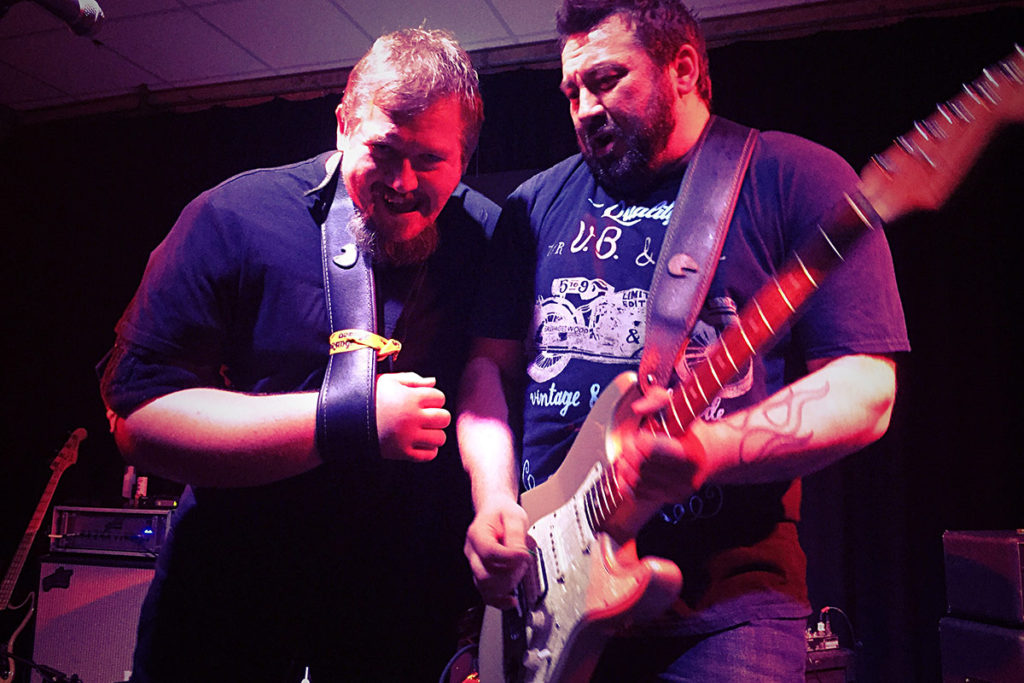 Like Stevie, Alan is an extremely accomplished and well-respected guitarist and vocalist with his band “King King”. However, Alan has recently had some issues with his voice which has meant he has been unable to tour.

Stevie told us that Alan had recently called him and stated: “I’m bored and I’m going to start lighting fires like when I was 11”. We broke the news here.

So, we have a Nimmo who can sing but not play and a Nimmo who can play but not sing. So they have joined forces for a one-off, never to be seen again show at The Meeting Room Elland and it was about to go down!

The doors opened and the people came flooding in brandishing their array of “King King” “Stevie Nimmo Trio” and “Nimmo brothers” t-shirts. We had a lot of new faces which was fantastic to see and the room was a hum of complimentary comments about the venue from the newbies. 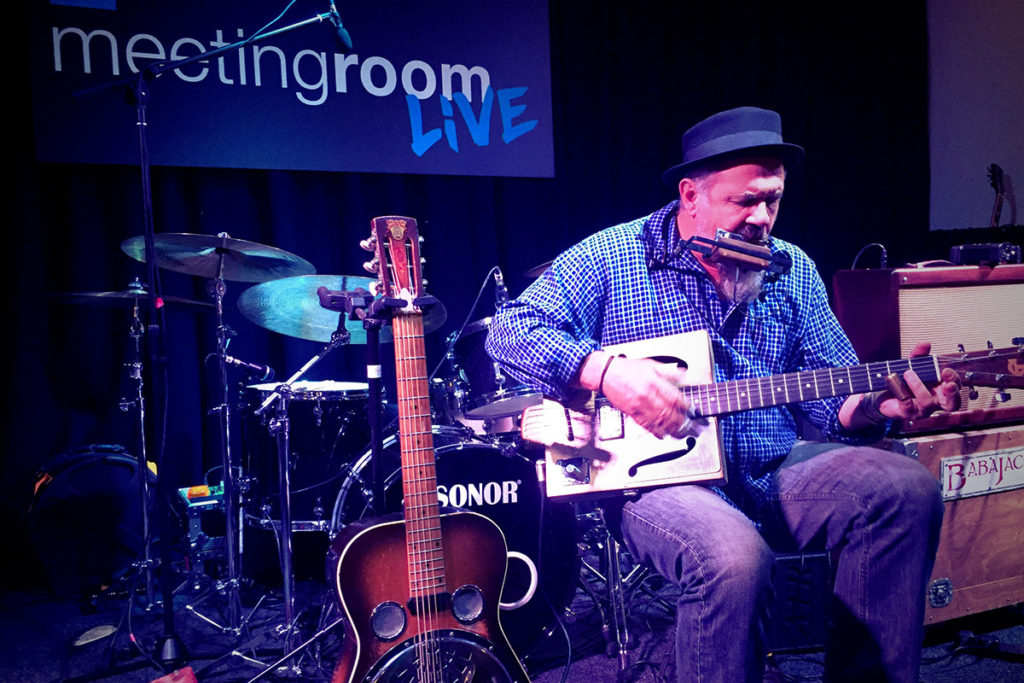 The show was opened by Trevor “Babajack” Steger who warmed up the crowd with his brand of raw, authentic acoustic blues played as a one-man blues machine.

Homemade cigar box guitars, resonators and self-made stomp boxes blended with growly vocals and wailing harmonica. This is out and out BLUES and the Meeting Room crowd loved it.

You can hear influences from around the world in Trevor’s music. Indian influences could be heard in his opening track (which I missed the name of…sorry) and there are African roots heard throughout which blend seamlessly with the swampy heavy drones of the resonator or the melodic wails of the harmonica. Trevor delivered his “blend of blues” to an eager audience who he entertained both during and between his songs with charm, class and his wealth of experience.

Once Trevor had wetted the pallets of the crowd it was time for Stevie and his guys to take to the stage.

I spent the majority of the show at the front clicking away and scribbling notes like a mad woman. But as I sat at the front as the show was about to start I could feel the hum of excitement from the crowd behind me.

The excitement was contagious

Then the whole room took a breath as the guys took to the stage…then BOOM!!

There was Matt Beable on Bass guitar, Craig Bacon on drums, Alan Nimmo on guitar and Stevie up front on vocals with his arm all strapped up (Strapped with a guitar strap… he is a very resourceful fella).

The guys kicked in with “roll the dice again” from The Stevie Nimmo Trio’s 2016 album “The Sky won’t fall”. This is a kicker of an opening song with a chunky feel and powerful vocals from Stevie.

Right from the get-go, we saw smiles on the stage which showed that the guys were here for business and ready to enjoy themselves.

Fans of the band were singing along from the start and the crowd got their toes tapping and their heads bobbing along just in time for the song to change into the rockier track “still hungry”.

The switch was flawless from one song to the next and it became apparent that, even though we were seeing a “one-off” Stevie Nimmo Trio line-up, these guys know each other so well that when they all get together they subconsciously know where they are going next and how to get from one place to another.

It’s at this point that I realise I am over 800 words into this review and I’m only on the second song. But I feel it was incredibly important to set up the scene of how this show came to be and just how much of a special night it became.

From here on I will endeavour to “get to the bloody point and review the music”… ah, hem.

The guys played an array of tracks from Stevie’s original catalogue with some perfectly executed covers thrown in for good measure. Every cover had a back story and meaning which was shared with the audience.

Stevie is the master of telling stories and making his audience feel welcome and at ease. I have had the pleasure of meeting Stevie a couple of times now and he is genuinely one of the nicest dudes you could wish to meet. He has always been courteous, approachable and incredibly humble which is exactly how he is on stage.

Stevie told the story of how he ended up in a sling and how it came about that Alan was playing that night and he correctly stated “Well, if you are going to get somebody, you may as well get the best… it just so happens he is my brother”.

It was also incredibly touching to see Stevie stand back and give his brother the nod to ‘let them have it’ and it was an absolute joy to see Alan let rip like he is famous for. 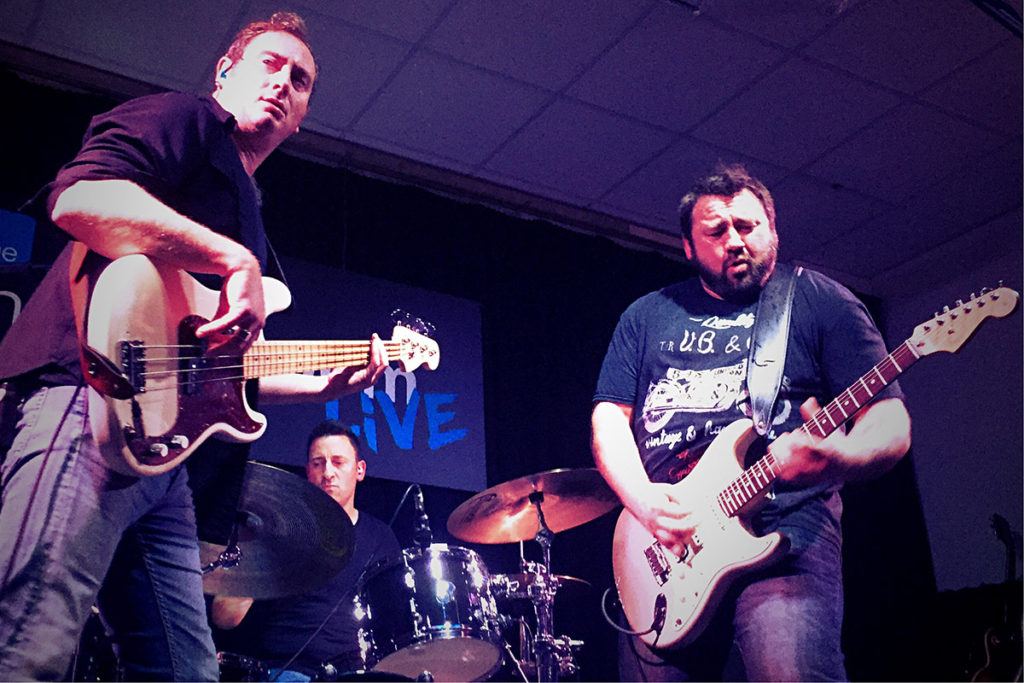 Alan is a phenomenal guitarist who is a pleasure to listen to and to watch, he has a very natural stage presence that radiates from the stage. It seems it is a family trait as Stevie also has charisma by the bucket load.

I always find it difficult to compliment the drummers and bass players enough as they tend to be the ones who stand back a little bit keeping the engine running out of the spotlight.

But in this case, the spotlight included all 4 people on the stage and they were all as essential as each other. Each member of the band had their moment up front with spaces for intricate drum fills, groovy bass solos or screaming guitar. These guys didn’t just “play” they “entertained”. They were all solid as rocks and skilled to the max.

However, for me, it was the vocals that I honed in on.

Especially on the slower number such as “running on back to you” and the Storyville cover “It’s a good day for the blues”.

Stevie’s voice is like velvet and he is able to portray the feel of the song through his vocals no matter what that emotion may be. I did spot that he was a little lost in what to do with his hands on a couple of occasions, which is understandable, and there were moments of “unconscious air guitaring” but this in NO WAY impacted on the vocals, they were strong, clear, concise and there were magical moments where all Stevie had to do was sing… and boy did he sing!!!

All tastes catered for 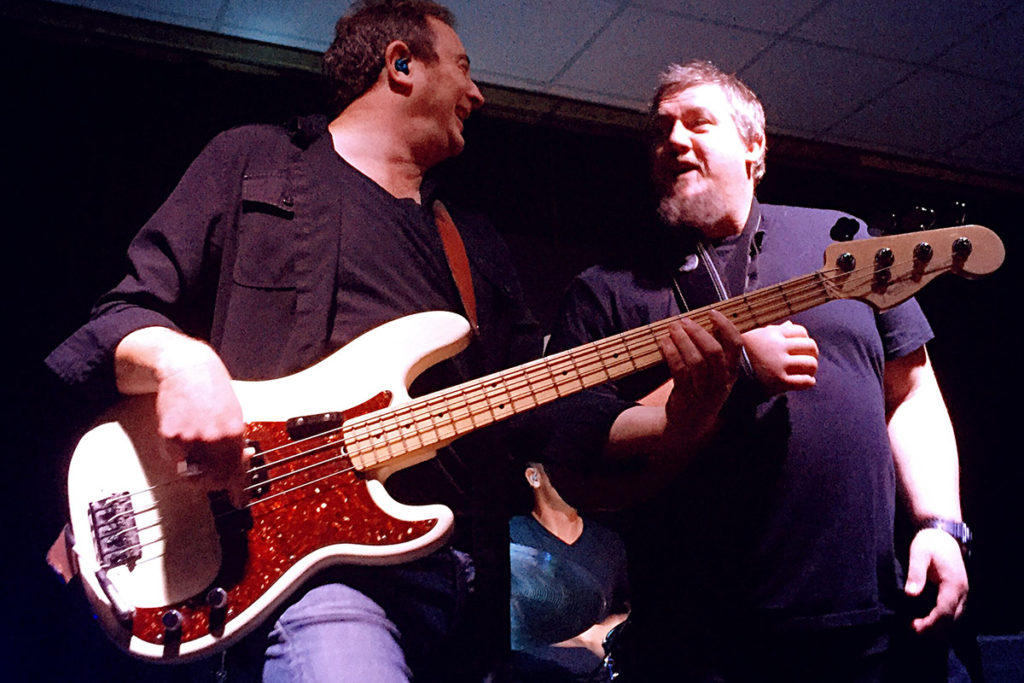 Do you want a ballad? Stevie can make you weep on his cover of Eric Clapton’s ‘River of tears’.

Do you want some rock? Let Stevie wail on covers such as ‘going down’ (which was dedicated to Walter Trout that night).

We had rockers, rollers, weepers, screamers and deep down and dirty. Each song was delivered by the crème de la crème of the blues musicians fold and they performed with grace, energy and true professionalism.

These guys are the ultimate professionals, they know what to do and how to do it and they do it incredibly well.

Not one face was without a smile by the end of the night and those smiles carried right through to the merch table where the guys stood and chatted to people, taking photos and signing albums for around an hour.

This really was a special night and I think everyone there felt it. It can never be replicated but is one for the books.

Make sure you don’t miss out on these magical nights and get to the Meeting Room in Elland. You just never know what might happen or who may show up.

Until next time when the John Verity Band takes to the stage.