So, this month we had the pleasure of hosting for the long awaited return of Lewis Hamilton and the Meeting Room debut of Alex Fawcett featuring the Boneshakers. 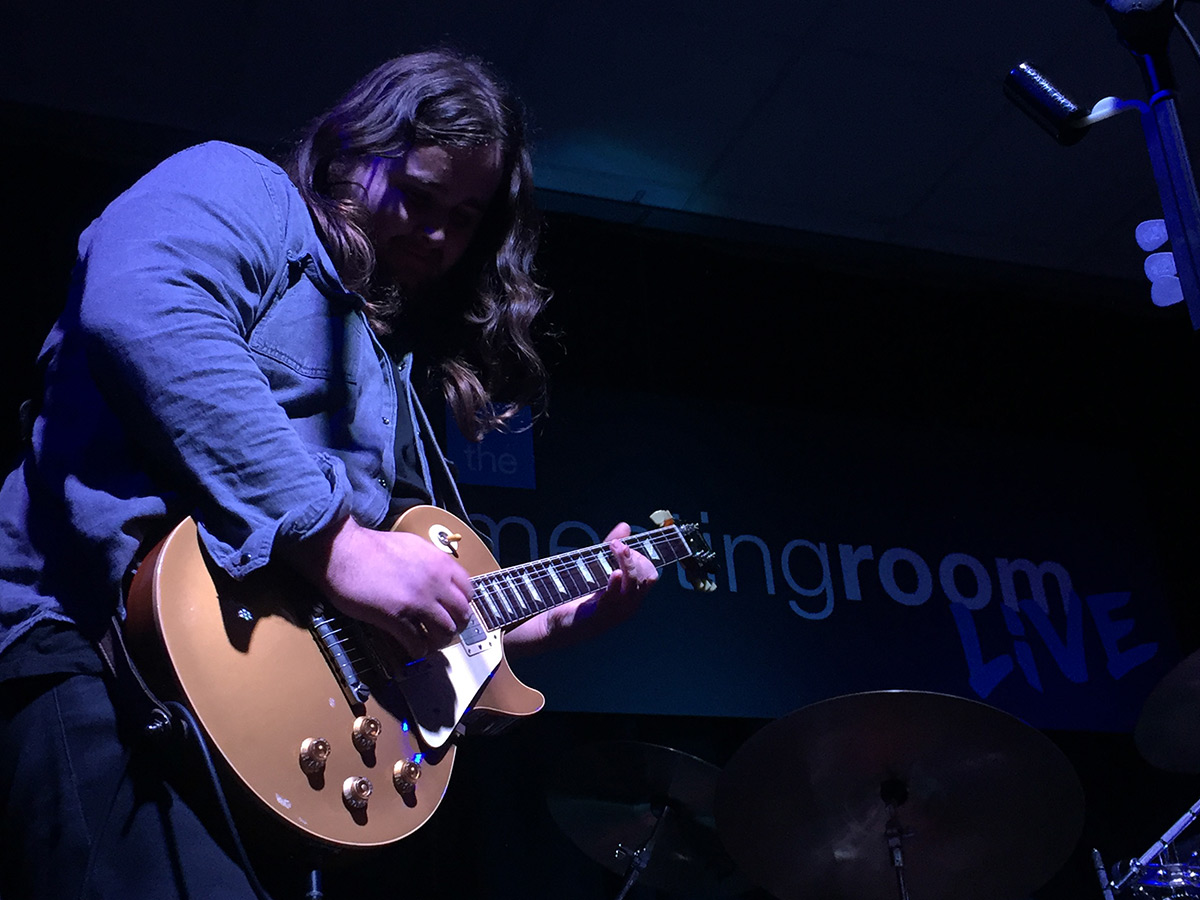 Kicking Off With The Boneshakers

It was down to Alex and the gang to kick off the night for us and get the crowd warmed up ready for Lewis and boy did he deliver!

Paddy Maguire, Music Director, first came across Alex Fawcett in a tiny pub called The Quakerhouse in the Mechanics yard in Darlington. This is an amazing little spot if you can find it, its Darlinton’s most hidden gem and it beholds such talent as Alex and his band of merry men (and lady). 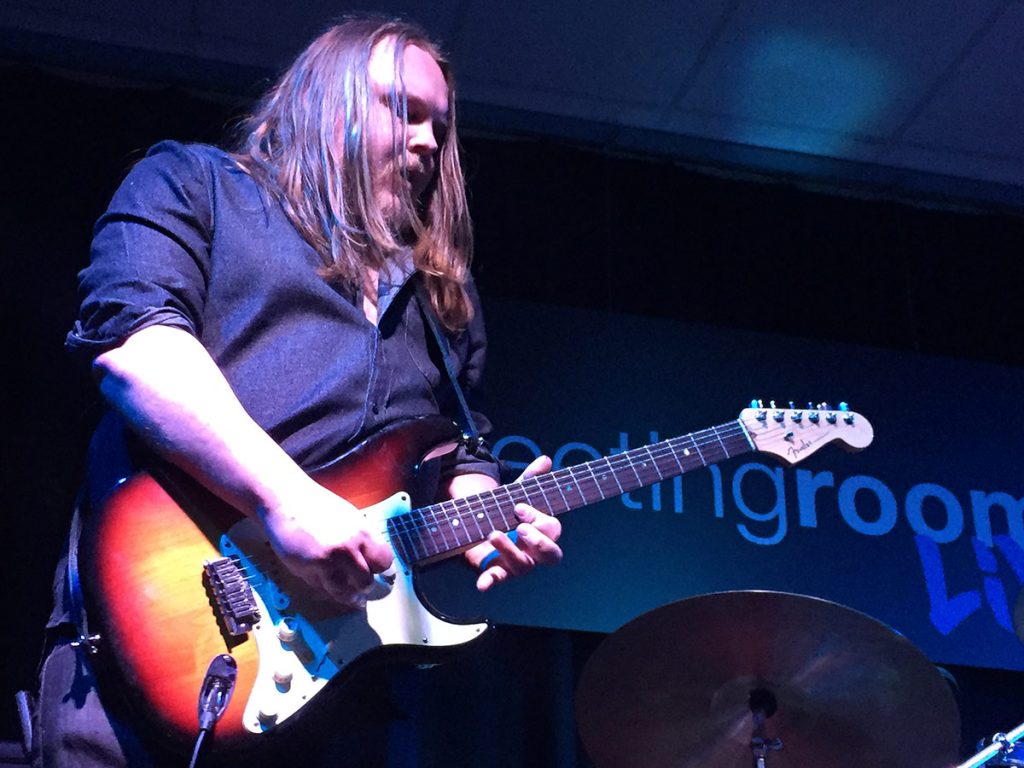 Alex and the boneshakers started as a 4 piece band with Alex Fawcett on lead vocals and guitar (or “plank” by Alex’s words), Jack Watson on keys, vocals and extreme face pulling, Robin Love on drums and vocals and the very cool Ronnie Semple on harp and vocals.

We knew we were in for a treat as the band started at full throttle and popped us in the face with this first number of a shuffled up version of “king bee”.

The rhythm section were tight as mustard and solid as a rock in this energised version which included brief introductory solo pieces from each member of the band. Jack and Robin locked in as the rhythm section along with Alex’s chunky rhythm guitar to create a train line motion through this cover and Ronnie delivered perfectly timed accents on the vocal lines which accentuated that shuffle/ train like feel, before jumping forward to deliver a cool harp solo which wailed expertly above the rest of the band. 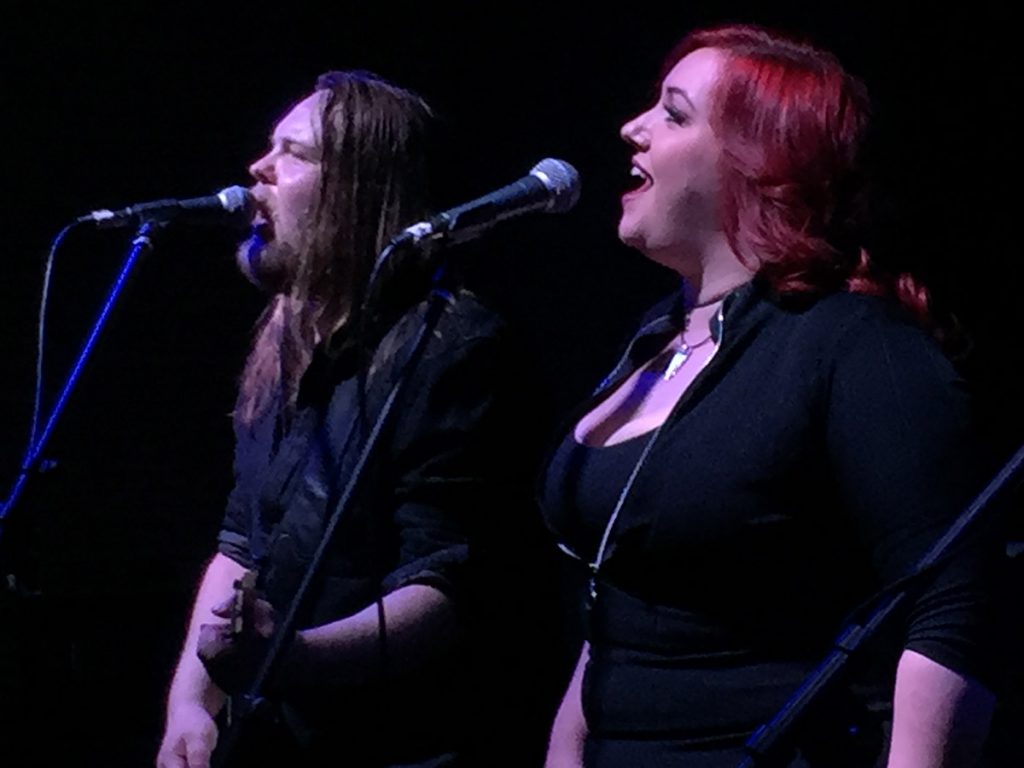 We had a mixture of covers and original songs which were pretty mature and accomplished in their structure. The funky “that woman’s no good” showed off Alex’s gravelly voice and vocal range while “no love no more” showed his emotional lyrics and fantastic ability to portray them.

Alex led the band like a pro beyond his years and seemed to wholly enjoy his time on stage, he got the audience involved and then brought on another secret weapon… Rachel Fawcett… his sister!

Rachel popped up and surprised us with her powerhouse vocals on “can’t hold out (talk to me baby)” originally a Willie Dixon tune. Again the audience got involved and were expertly guided by the whole band.

The band ended their slot with a harmonised version of Rory Gallaghers “Shadow Plane” which really rocked up to the end to finish off the set perfectly.

A Quick Change For The Main Event

A quick change over by the Meeting Room’s very own “dynamic duo” (Woody and Steve) and we were ready for Lewis Hamilton.

Lewis has recently moved from Scotland to join the fantastic Yorkshire folk down here (must be the attractive weather). Lewis is a blues club favourite around the UK and Europe and we knew we needed to have him back. 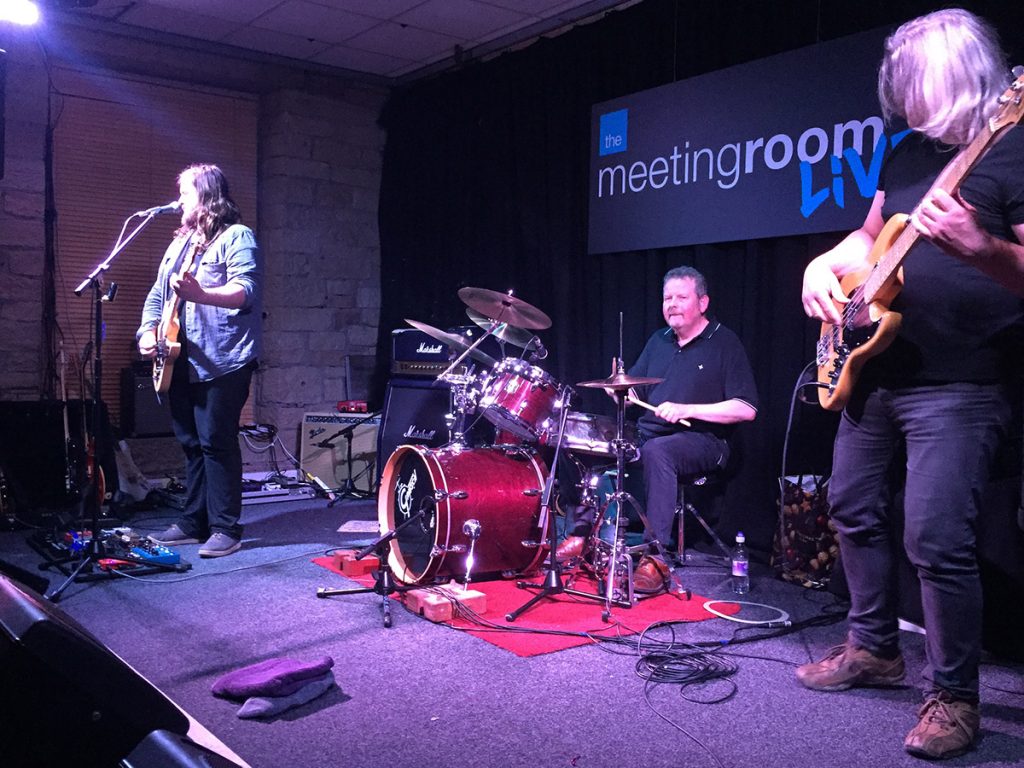 Lewis was joined by Ian Beestin on drums and Nick Hamilton on bass guitar (Nick is Lewis’ dad too).

After having a relatively full stage with Alex and the gang, it was stripped right back and looked bare as the 3 guys took to the stage. But once they started, the stage was anything but empty. This band can create a lot of sound for a 3 piece with their traditional interpretations of the blues genre.

Lewis is an extremely accomplished guitarist, this is evident in all the songs he plays but more notably in his chicken picking songs he performs. Notably on the very impressive version of Johnny Cash’s “Folsom Prison Blues”. A fast paced cover which not only showed the impressive talents of Lewis’ guitar and fast vocals but also of the rhythm section. That song had a REAL pace about it but they remained tight and seemed to be really enjoying it.

Lewis played several of his original songs which are now available on his album. The song “down to the river” was a punchy song which inadvertently made you bob your head, the vocals had a strong seasoned tone and the solo breaks, stop/starts and accents were well rehearsed and accented the songs perfectly.

Lewis showed his influences through his playing and his song choices. With such covers as “aint no sunshine” “Redhouse” “hoochie coochie man” and going down” you can see that he has his feet very firmly planted in the blues and you hear the guitar influences of Rory Gallagher and Stevie Ray Vaughan (its actually amazing how Lewis can get such a great Stevie sound on a Telecaster… for the guitar geeks out there) while still putting his own ‘flavour’ in the music. 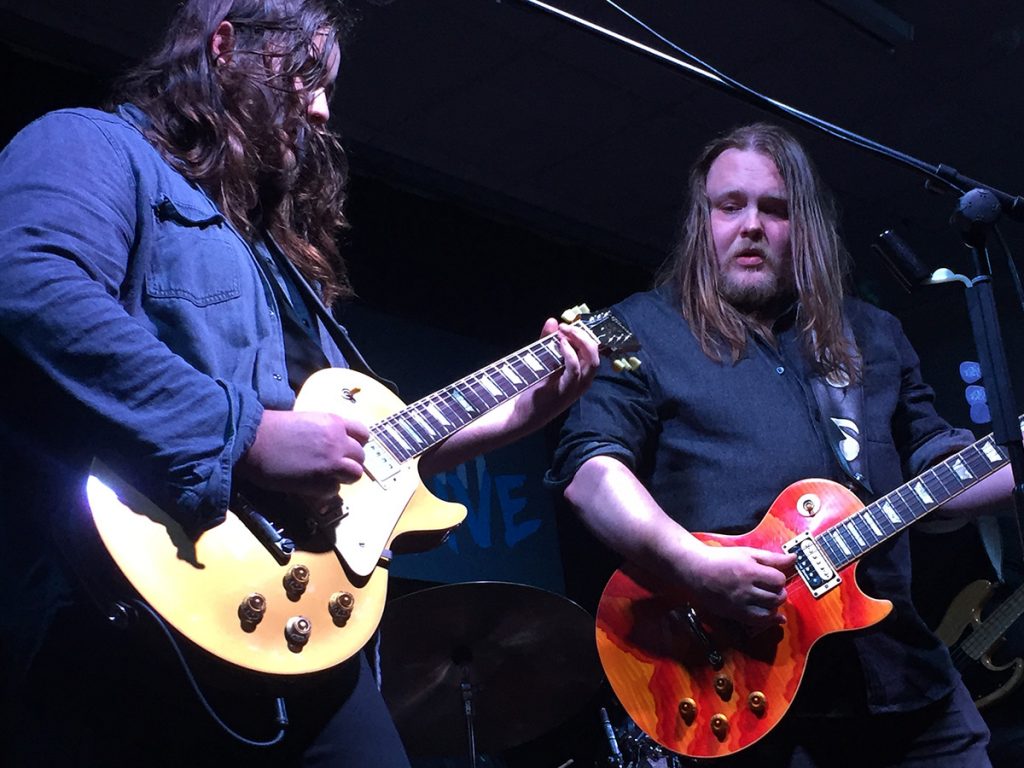 While Lewis is not the “in your face” entertainer that we have come to see from other rock/blues artists, he has the rawness of the old school which allows you to really listen to the intricacies of what the whole band have arranged. His peacefulness on stage flows through the audience and demands its own kind of attention… then he smacks you in the face with a guitar shredding solo.

Nick and Ian provide the steel backbone which allows Lewis to go and do his thing. They are tight, talented and the perfect accompaniment for the accomplished front man.

Lewis pulled Alex back on stage for his final two songs and they jammed out some instantly recognisable blues covers to send us on our way. I always love to see artists including other artists just as at the recent Northsyde gig. It creates these magical one off moments that may never happen again, which is exactly what we got.

Hats off to all the artists for a job bloody well done and thanks to all who came to bear witness.

See you all for the Marcus Malone Band gig in June. 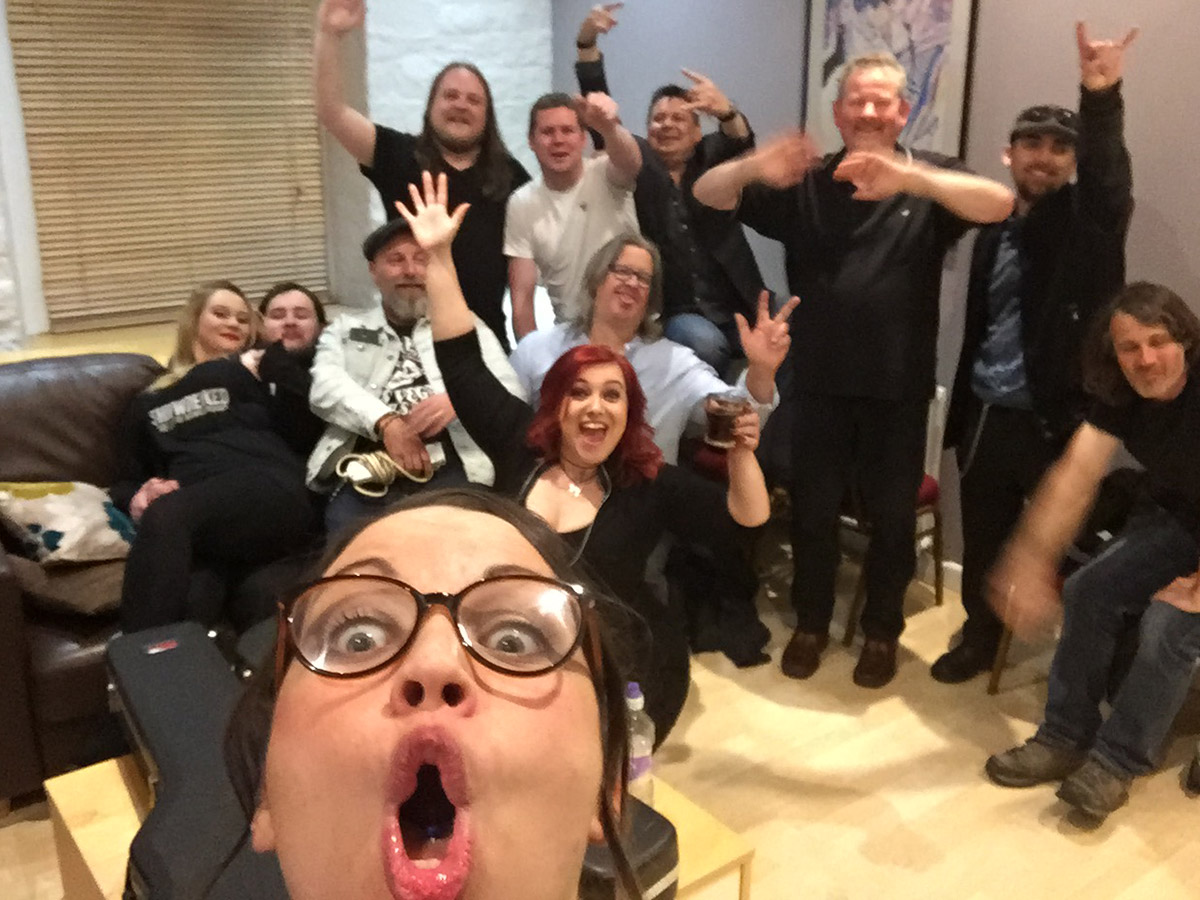