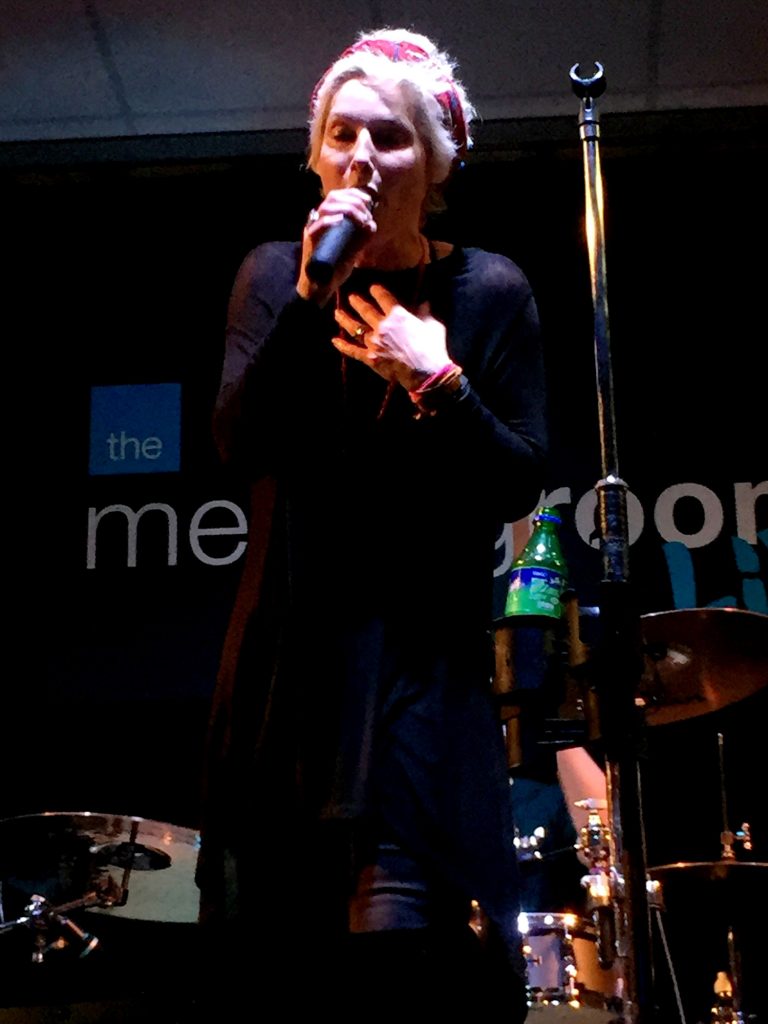 Tonight’s show was one I have been looking forward to since it was confirmed. The mighty Northsyde were making their Meeting Room return.

Northsyde have been Meeting Room favourites, now venturing up North for the third year in a row. Not only are they phenomenal musicians in their own right but they are also epic entertainers who share their love of music with their audiences through smiles, camaraderie and WICKED off the cuff jams!

Northsyde take you on a true “genre journey” through blues, soul, rock, funk, jazz and all in between and we were ready for them. But first…

Making her Meeting Room debut we had a support from Terri Shaltiel. Terri took to the stage to share her fusion of blues, jazz, funk with hints of reggae and soul. Terri was performing as a solo artist, so she was self-accompanying with the electric and acoustic guitar as well and some rhythmic hand drumming. She kicked into the show with one of her original songs called “Mr Misfortune”, featuring her powerful vocals taking the lead while she played electric guitar using the ‘wah wah’ to create the beats and rhythms.

I think it’s safe to say that as soon as Terri opened her mouth, the room took note. She has a killer vocal that demands attention and is reminiscent of Amy Winehouse. Her original material was strong and obviously self-written to promote that fantastic voice of hers but equally, the carefully chosen covers suited her style, vocal and richness. Such covers as “Since I fell for you” by Buddy Johnson and the rare Mama Thornton version of Hound Dog (That’s right… it’s not an Elvis song).

Then the band known as “the mighty Northsyde” took to the stage.

Anyone who knows me knows that I could be accused of having a biased opinion due to the fact that myself and Lorna are top buds… HOWEVER, aside from being very close to the band I am also a HUGE Northsyde fan. In my opinion they are one of the best live band the UK has to offer who have an eclectic repertoire of original material from their incredibly popular past albums “Storyteller’s Daughter” and Mercy’s Medicine” with another album to look forward to now on the way. 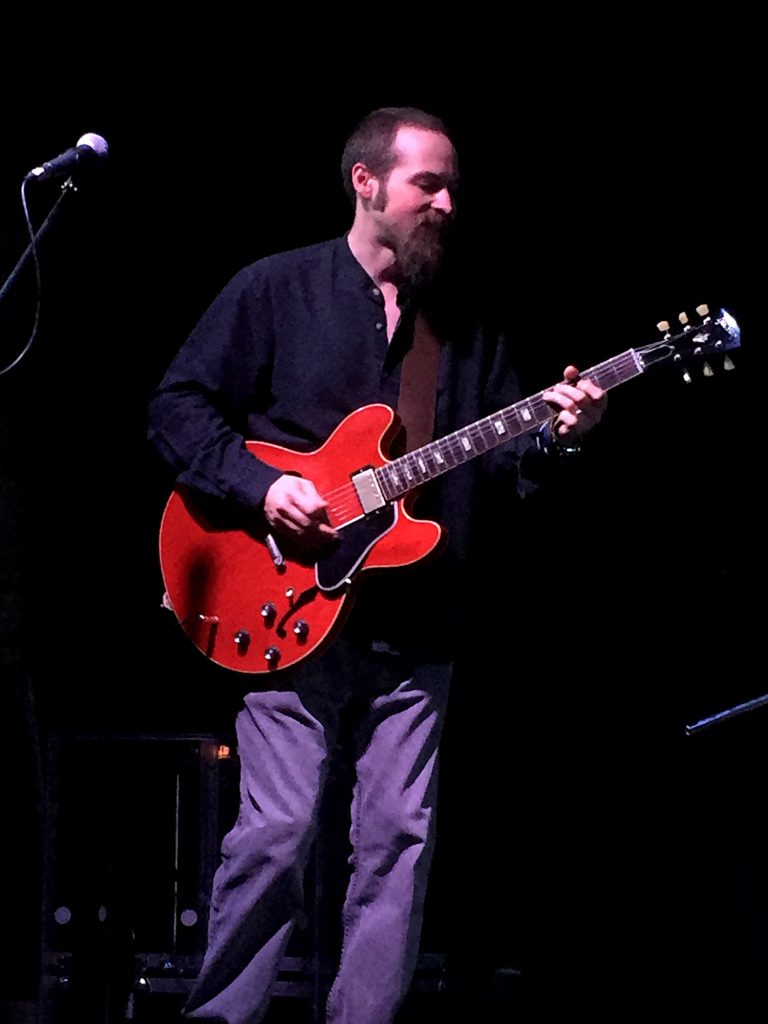 Each member of Northsyde is a phenomenal musician in their own right but once you get all four of them on the stage together, something very magical happens. On vocals you have the raspy tones of Lorna Fothergill, whose vocal control, dynamics and emotion resonates through every word. She truly feels what she sings and as an audience member you feel it too.

And as if that is not enough, they have one of the strongest and tightest rhythm sections you will ever see in Ian Mauricio (Dobby) on bass and Hayden Doyle on the drums. Ian and Hayden are well known on the circuit to be the best in their game following years of playing music together in several guises, genres and countries. You can easily witness the camaraderie, the love and what the musos call “the lock in” between them. They know exactly where they are going, what they are doing and what they are capable of. They jam within their parts freely which means you get frequent bursts of improvised genius never to be replicated but always remembered.

Northsyde kicked off the show with their original song “Devil Said” which smacked the Meeting Room in the face and ripped us a new one. It’s one of the rockier songs from their repertoire and it shot us to the back of our seats and made us ready to bear witness. The set flowed with original material spanning the three albums (including the new one) such as “Cherry Picking” “I’m Not Crying” “Get the Funk Out”, “ Tuesday’s Flowers” and the band title song “Northsyde”. The covers that Northsyde perform are dripping in Northsyde charm such as the Phil Collins classic “In the Air Tonight” and the highly funked up version of the Living Colour track “When Love Rears its Ugly Head”. 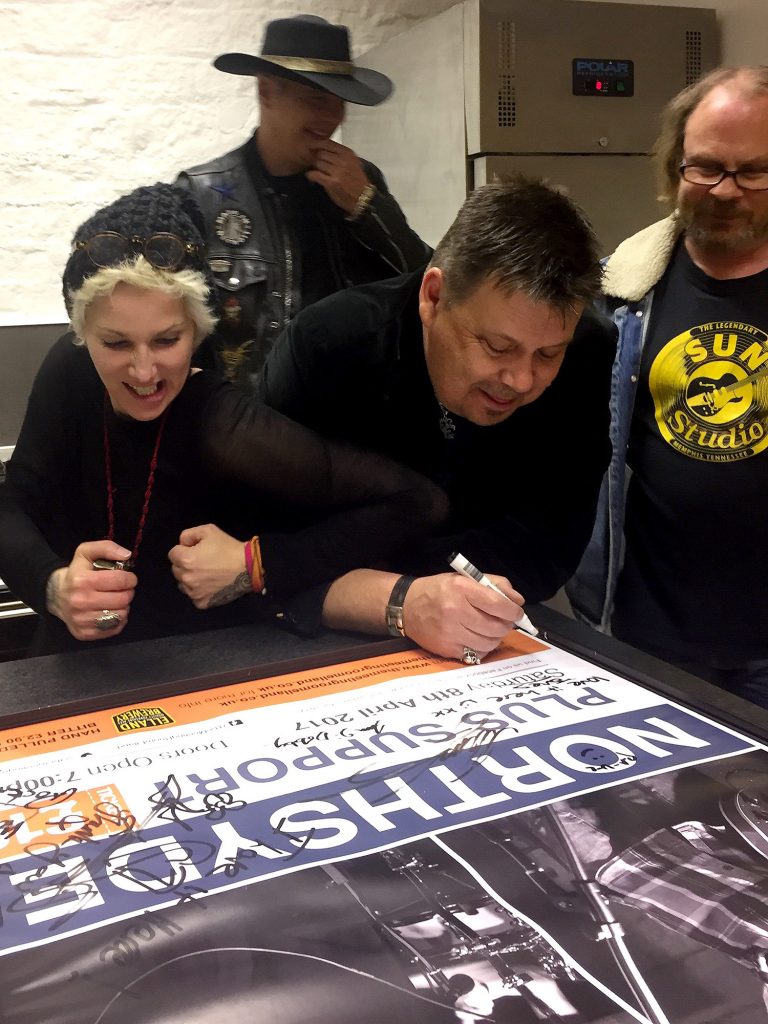 Northsyde are very much a “live” band, which means that they feed off the audience and go along for the ride with you. They are incredibly generous with the spotlight, enough to share the stage with other musicians and “jam out” to have fun. Tonight’s guests included yours truly with the hubby alongside (Paddy Maguire), Mr Paul Lamb all the way from Detroit (who will be back at The Meeting Room in August) and our very own top sound dude Woody on guest guitar, all seen in the picture signing the gig poster for the evening.

Northsyde are an incredibly welcoming and inclusive set of people who spread joy whenever they play. If you every get the chance to check them out, just do yourself a favour and do it!